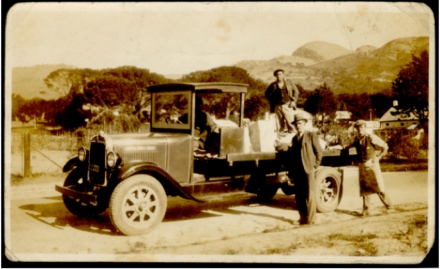 The Drakenstein Heemkring’s Gribble Collection includes a fairly large number of 19th-century photographs of granite stone masons and quarry owners. This photograph was taken in front of JA Clift (Pty) Ltd in Concordia Street, Suider Paarl. This family business was started by Jim Clift (centre) in 1908 and is today the oldest family owned granite contracting business in South Africa. His son William “Bill” (right) took over the family business.

Joseph Allen was probably one of the first commercial quarry owners. His quarry was situated on Laborie estate in Suider Paarl. He had a contract from the Table Bay harbour authorities to supply them with 200t of granite a month for extensions to Cape Town’s harbour. In 1877, the harbour authorities built a dedicated railway siding adjacent to Paarl Station for Allen in order to facilitate the transportation of granite. In 1907, Allen’s operation included a railway line that linked his quarry with the siding. Mules were used to drag the heavy railway trucks up the hill towards his quarries. Once filled, gravity and a heavy duty screw brake system returned the trucks to the railway siding at Paarl Station.

Jim Clift settled in Paarl in 1908 after completing a contract to supply granite for the Rhodes Memorial on Devil’s Peak. In Paarl, he opened up a quarry on the farm De Hoop and established a monumental yard in Concordia Street, north of Paarl Station.

Today many of Paarl’s older buildings have granite cornerstones or cladding. In Suider Paarl there several granite houses in Main Street and in Concordia Street, as well as granite dry-stone walls. Granite kerbing can also be seen through Paarl’s older suburbs. Architects have included granite in the design of the following Paarl buildings:

All Paarl’s cemeteries are filled with granite tombstones and gravestones. Most were made by local stone masons. Some of Paarl’s better known monumentalists included:

In 1931, according to the Voters’ List of that year, there were 220 stone masons and quarrymen living in Paarl. This is a word-cloud of the names that appeared in the 1931 Voters’ List:

Most worked in quarries and monumental yards, but many businesses like the KWV, Royal Baking Powder and the Paarl Municipality also employed stone masons. About 45% of the stone masons lived in Northern Paarl and 27% in Suider Paarl.

One thought on “Stone masons and granite quarries”