The Van Riebeeck Society recently published “An Entirely Different World – Russian Visitors to the Cape 1797-1870”. The editor, Boris Gorelik, had contacted the Heemkring in January 2014 to help him locate some local landmarks. So, the book has a number of colourful references to Paarl, but here is a wonderful portrait of Andrew Geddes Bain (1797-1864) captured by the Russian novelist Ivan Goncharov (1812-1891). Goncharov was part of a large Russian expedition to the Pacific Ocean. The Russian fleet docked in Simonstown from 22 March 1853 until 24 April 1853, during which time a group of the higher ranking officials visited Stellenbosch, Paarl, Wellington and Worcester. During this trip, they were introduced to Bain, who was then finishing the Bainskloof Pass.

Here is Goncharov’s first impression of the 56-year-old Bain:

Bain is tall, built sturdily and strongly; he walks a great deal, taking long firm strides like an elephant, no matter uphill or downhill. He eats a lot, like a workman, and drinks even more; he has a reddish complexion, and he is balding. From learned conversation, he passes easily to joking, and he sings so loud that we, all together, could not shout him down.

Bain accompanied them along the pass – then open only two days a week to travellers – to Worcester, where Bain proved to be the life and soul of the party.

We dined until midnight. Bain showed himself to be a lively companion; he sang Scottish and English songs in his falsetto for all of Worcester to hear … We sang too, in chorus and solo, to the accompaniment of a piano in the corner of the room.

The following day they returned to Wellington where the Russians were housed in a hotel that by all accounts served very poor food. Before departing for Cape Town the following morning, the Russian party stopped at Bain’s house to say their last good-byes.

Bain presented us to his daughters, four mature Afrikander maidens, born in Africa. His wife was Dutch. He is a widower. Around the girls were many little dogs, a sign of vanishing hopes for love and marriage. Mature maidens, having stopped dreaming, focus their need to love on cats and little dog; the more tender spirits on flowers. The eldest daughter was an old maid. The third one, a tall slender girl, was quite pretty, and the other two were so-so. They tried to offer us coffee and breakfast, but we thanked them pleading need for prompt departure. Mr Bain proposed that we should see his museum of fossils. He suggested that we take a few small reptilian skeletons for the museum of natural history in St Petersburg.

Bain married Maria Elizabeth von Backström in 1818 and they had 11 children. Goncharov does not mention Bain’s daughters by name, but they were probably Jane (34), Wilhelmina (27), Margaret Sophia (21) and Andriëtta (19). His youngest daughter, Victoria Fredrica was 16 years old in 1853. 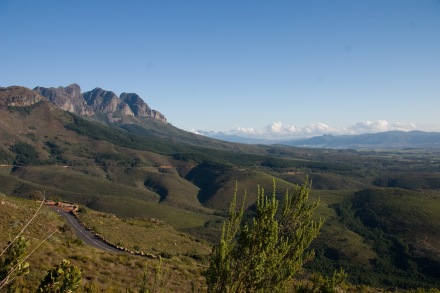 It was quite by chance that I recently stumbled on a few articles commemorating the opening of Bainskloof Pass. The articles were published in a 1953 supplement of the Paarl Post and included verbatim transcripts of speeches as well as eyewitness accounts of the events. Today, 162 years later, it is easy to forget just how significant the completion of the pass was for residents of the Cape. END_OF_DOCUMENT_TOKEN_TO_BE_REPLACED

The Drakenstein Heemkring’s Gribble Collection includes a fairly large number of 19th-century photographs of granite stone masons and quarry owners. This photograph was taken in front of JA Clift (Pty) Ltd in Concordia Street, Suider Paarl. This family business was started by Jim Clift (centre) in 1908 and is today the oldest family owned granite contracting business in South Africa. His son William “Bill” (right) took over the family business. END_OF_DOCUMENT_TOKEN_TO_BE_REPLACED 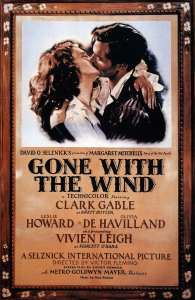 “Gone with the Wind” was first released in 1939. [Wikimedia]

The epic movie “Gone with the Wind“, based on Margaret Mitchell’s novel, was released in 1939 on the eve of World War II. The movie took the world by storm and gave Vivien Leigh and Clark Gable cult status. Despite the movie’s feminist undertones, the following quote from the book’s author provides a more sobering perspective of women’s status in society in the 1930s:

“Life was not easy, nor was it happy, but she did not expect life to be easy, and, if it was not happy, that was woman’s lot. It was a man’s world, and she accepted it as such. The man owned the property, and the woman managed it. The man took credit for the management, and the woman praised his cleverness. The man roared like a bull when a splinter was in his finger, and the woman muffled the moans of childbirth, lest she disturb him. Men were rough of speech and often drunk. Women ignored the lapses of speech and put the drunkards to bed without bitter words. Men were rude and outspoken, women were always kind, gracious and forgiving.” – Margaret Mitchell END_OF_DOCUMENT_TOKEN_TO_BE_REPLACED

“The Cow Pock – or – the Wonderful Effects of the New Inoculation! by the Anti-Vaccine Society”. The above cartoon shows Edward Jenner inoculating members of the public with cowpox. The fear then was that once inoculated, people would develop “bovine” characteristics or anatomical features. In the foreground a boy carries a pot with the label: “VACCINE POCK hot from yer COW” and in his pocket are papers with the headlines “Benefits of the Vaccine”. On the desk there is a pot called “OPENING MIXTURE” with a bottle carrying the label “VOMIT”. The painting against the wall depicts the biblical scene of people worshiping the Golden Calf.

A portrait of Edward Jenner by James Northcote [Wikimedia Commons]

The Cape experienced its first smallpox epidemic in 1713. Fatalities soared between May and July and contemporaries wrote that people died in such numbers that many bodies had to be buried without coffins and in shallow graves that attracted scavenging hyenas, jackals and feral dogs. In the open country bodies decomposed along wagon tracks and foot paths. There was another outbreak in 1748 and in 1755 a homeward bound ship from Ceylon caused an outbreak that killed more than 2,000 settlers and slaves.

Drakenstein during the 1713 epidemic

Curious as to how smallpox may have affected the people living in the Drakenstein area, I looked through a few MOOC documents relating to deaths in 1713. END_OF_DOCUMENT_TOKEN_TO_BE_REPLACED

Carl Friedrich Drège was born in Altona near Hamburg, arrived at the Cape in 1821 and worked in Cape Town as an assistant apothecary Pallas & Pohlmann. The 35 year old Carl Friedrich registered as an independent apothecary in 1826 with a shop at 4 Long Street, on the corner of Long and Grave Streets. END_OF_DOCUMENT_TOKEN_TO_BE_REPLACED

Contact the Drakenstein Heemkring: email info@drakensteinheemkring.co.za to become a member.

Early European cookbooks were generally written for professional chefs, who were mostly men. So essentially these books were written for an elite audience.

A very new type of cookbook came into print during the 19th century. These cookbooks were generally written by women, for women and responded to a demand for professional instruction. This was only possible because literacy rates among women was on the rise. Industrialisation, migration and social mobility also required greater self-sufficiency. END_OF_DOCUMENT_TOKEN_TO_BE_REPLACED

The Drakenstein Heemkring has over the years collected a fair number of personal letters and artefacts. Recently, while sorting out the Marais file, we came across two letters written by Abraham Marais to his children. Marais was a director of the Paarl Bank, and the letters were written during one of the most dramatic periods in South African banking history. Here are two extracts:

Wild speculation in first diamond shares, and later gold shares, greed and an unregulated banking environment created the financial crisis which led to the collapse of one of the Cape’s oldest bank – the Cape of Good Hope Bank, as well as a number of small private banks. It all started with Kimberley’s diamond rush. END_OF_DOCUMENT_TOKEN_TO_BE_REPLACED