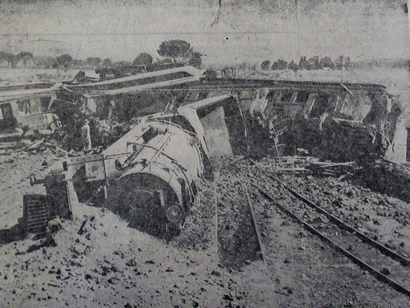 Five people were killed on 13 February 1939 when the Union Limited mail coach from Port Elizabeth derailed near Daljosaphat Station between Paarl and Wellington. Acording to newspaper reports three carriages were reduced to a twisted heap of wood and metal. The accident happened near what was then the Premier Canning Factory. The train-driver Cornelius Badenhorst was badly burnt by boiling water and escaping steam. His assistant Engineer W Bensch’s badly scalded body was found buried beneath the wreckage, and it took rescuers two hours to extricate fellow crew members, Willie Pering and Henry Heyns. Four passengers died – three men and a young woman.

Hundreds of spectators gathered to watch the rescue operation that went on through the afternoon and into the evening. Cars were parked “all over the veld” wrote a newspaper reporter. Many more spectators arrived by bicycle, while others walked the two or three kilometres from Paarl. People also travelled from neighbouring towns, and the reporter described a “continuous stream of traffic coming from Paarl to Daljosaphat”, that included reporters and photographers from the Cape Town newspapers. He also noted two planes flying low down over the wrecked carriages.